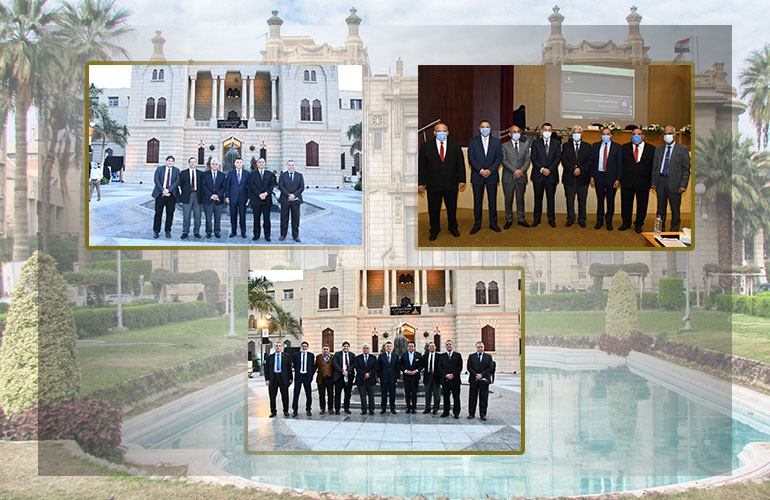 The Faculty of Engineering, Ain Shams University, hosted on Wednesday 10/14 the monthly session of the Supreme Council of Universities headed by Prof. Dr. Khaled Abdel Ghaffar, Minister of Higher Education and Scientific Research, and in the presence of Dr. Mohamed Latif, Secretary-General of the Council, Prof. Dr. Mahmoud El-Metini, President of Ain Shams University, and the heads of universities, to discuss preparations for the new academic year 2020/2021.

According to the statement issued by the Ministry of Higher Education and Scientific Research, the Council issued a number of decisions, namely:

Completion of drawing up all academic schedules and announcing it during the first week of study, according to the announced hybrid education system and according to the nature of the colleges and institutes.

The commitment of faculty members to be present from the first day of study and the importance of starting reviews on courses and training courses that were not completed during the study interruption; Due to the emerging corona virus pandemic.

Preparation within colleges and institutes in universities with areas designated for triage and temporary isolation in the event of suspected cases of the emerging coronavirus, with implementation steps being put in place to deal with cases through the central crisis management sector and coordination with university hospitals and infection control units in this regard, and circulating the questionnaire prepared by the Supreme Council of Hospitals Undergraduate students and workers at universities are encouraged to contact the hotline (105) and then choose the number (3) for consulting faculty members in Egyptian medical colleges in the event that any symptoms appear on them.

Confirm the speed of starting private university projects related to public universities, with the necessity of speedy completion of the proposed academic programs.

Completion of the national project for the information environment system for Egyptian universities, through specific timetables, especially with regard to the smart university system and standardized electronic exams, as well as the speed of completion of electronic examination centers in all public universities and the national project for the automation of university hospitals, according to the mandates of President Abdel Fattah El-Sisi in light of support The unprecedented progress provided by the President for the development of the university education system and university hospitals.

On the sidelines of the meeting, the attendees witnessed the celebration of the anniversary of the October victories at the theater of the Faculty of Engineering at Ain Shams University.

The celebration included a selection of activities for students of Ain Shams University in singing, music, choral and folk arts.